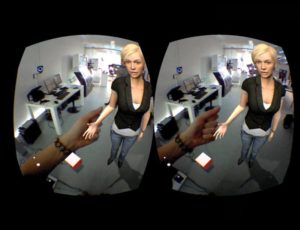 Mixed reality blends the real and the virtual both visually and semantically, challenging existing forms of representation, meaning, ownership, and agency. New technologies raise new questions – but will they necessarily reinforce the same systems of identity and control? Where the virtual collides with the real everything is up for grabs — again (Image: New Scientist, https://www.newscientist.com).

Mark Pesce is best known as co-inventor of VRML, which brought 3D graphics to the Web. Pesce has written six books and co-founded postgraduate programs at the University of Southern California’s School of Cinema, and the Australian Film, Television and Radio School. Since 2006 he has held an Honorary appointment in the Digital Cultures Program at the University of Sydney.