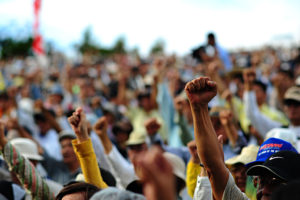 Mobile communication is increasingly playing a leading role in the coordination and mobilization of social and political protests around the world. Smartphones are changing the way political protests and movements are organized as geographical boundaries continue to diminish as citizens and activists unite in adopting digital tools provided by social media platforms such as Twitter, Facebook and YouTube to invigorate protest communication. In this regard, like everywhere else, social media is helping spread ideas and information exponentially from one user to another among Africans. Information that previously was inaccessible to citizens as a result historically of a tough media regime, is now readily available online. The availability of online movements provides a firsthand opportunity to critically examine current digital engagements among citizens and activists seeking political reform in several African countries. This paper is a case study analysis of the trends, opportunities and challenges facing the online activism movements in Africa, where in spite of widespread poverty, access to technology is growing fast.

Bruce Mutsvairo is an Associate Professor in Journalism at University of Technology Sydney. He previously taught journalism and media at Northumbria University Newcastle, Amsterdam University College and Leiden University, where he earned his PhD in 2013. His research explores the role of technology particularly social media in galvanising political and social changes across Africa. Bruce is a former correspondent for the Associated Press in Amsterdam.