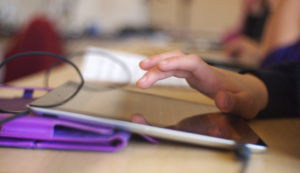 Co-hosted by the Institute for Culture and Society Seminar Series

Children constitute an estimated one-third of the world’s population, and, significantly, one-third of the world’s internet users. As society increasingly embeds digital networks and services into its fundamental infrastructure, the rights of both users and non-users in a digital age matter. To understand how children’s rights in particular are being reconfigured in and through digital networks and services, this presentation identifies a series of problems and paradoxes faced by the theory and research on the one hand, and by policy and practice on the other. I shall then suggest some constructive directions, drawing on my recently edited special issue of New Media & Society

, and advice given to the Council of Europe and the Children’s Commissioner for England. These initiatives were conducted jointly with Amanda Third, who will respond to my remarks.

This seminar will be chaired by Professor Gerard Goggin (University of Sydney) with Associate Professor Amanda Third (Institute for Culture and Society) as discussant.

Sonia Livingstone is a professor inthe Department of Media and Communications at London School of Economics. Taking a comparative, critical and contextualised approach, Sonia’s research asks why and how the changing conditions of mediation are reshaping everyday practices and possibilities for action, identity and communication rights. She has published twenty books on media audiences, particularly examining the opportunities and risks for children and young people afforded by digital and online technologies, and with a focus on media literacy, social mediations, and children’s rights in the digital age. Her most recent books include The class: living and learning in the digital age

(2016, NYUP) and Digital technologies in the lives of young people (edited, 2014, Routledge), Meanings of Audiences (edited, 2013, Routledge) and Media regulation: governance and the interests of citizens and consumers (2012, Sage). She is a fellow of the British Psychological Society, Royal Society for the Arts, and is fellow and past President of the International Communication Association. She was awarded the title of Officer of the Order of the British Empire (OBE) in 2014. She leads the projects Global Kids Online

and Preparing for a Digital Future

and she directed the 33-country network, EU Kids Online